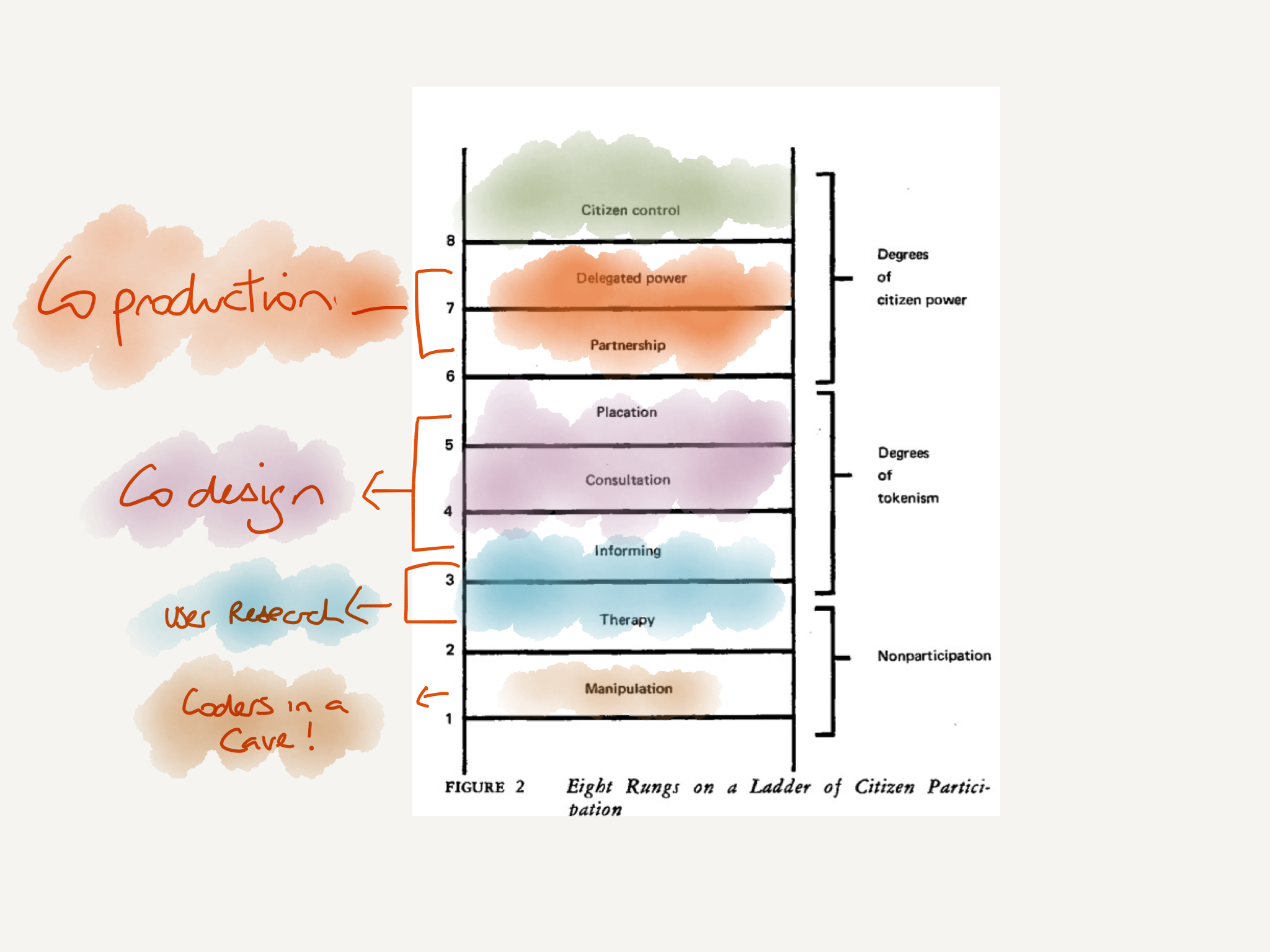 I was talking the other day about potential visions for future public services. I was asked what mine was and I didn’t give one. Instead I talked about culture and method and behaviours because  how we go about shaping the future is critical, how we work will determine what is within reach.

I have passionate belief in a future where our society is more fair and inclusive and where we we make decisions in a more participatory way. A consequence of this has to be that different places will have different visions of the future which have been crafted by the people who live there.

Who am I to say what a vision of a place disconnected from me should be?

There are big social and economic questions which we can and should work on together, questions where we think like a system but building around communities means difference – rich human centred difference. Thinking like a system doesn’t bring with it cultural homogeneity, a network of networks is strong because it allows people both enclave and shared spaces.The challenge of our time is how we accommodate and respect those differences. This for me is the purpose of democracy.

In crafting those future visions we have to therefore ask: How do you design for democracy? How do you build it into the fabric of the tools we use and environments we inhabit like the word that goes through a stick of rock and not simply as an optional veneer that we overlay only to have it crack at the smallest pressure?

Design thinking has rightly moved to centre stage as we consider the challenge of redesigning public and private services alike. User centred design in particular creates services and outcomes which are more successful and certainly more useable which is why its so central to, for example, the transformational work of GDS. Its a (relatively) short jump from these kinds of approaches to more evidence based and iterative policy making which can only be a good thing. Have a look at the work of the Policy lab as well as the GDS method description which is providing a blueprint currently for the development of public services.

Back in the pre-digital age (or relatively recently for anyone who remembers eGov!) policy making, politics and service delivery operated on the basis of electoral cycles – underpinned by a democratic process which is designed around the idea of sending a man to London so that a bunch of them can sort it out for us all. All very waterfall, lacking in participation and no longer fit for purpose once technology started becoming more networked and user centred – as the network society starts to emerge we need new ways of making decisions. The journey between a political idea and a service being delivered needs to change to reflect new ways of doing things. If we are thinking systemically (another set of ideas which is moving to the centre of public service reform thinking – have a look at this recent report from the RSA for more on this) then we have to look at all elements of the process.

Policy making was not designed to operate without politics and there is a risk that in embracing these more iterative and user centred approaches that we shelve the question of democratic reform as either ’too difficult’ or more worrying ‘not relevant’ to the growing govtech ecosystem. There is a risk that we stay on Arnstein’s first rung of participation and simply seek ever more sophisticated ways to manipulate people. The dilemma is clear – if we want a more participatory and democratic society then we cannot pretend that co-design is a substitute for democracy.

Because design matters – especially now when the decisions that we make are invisible – buried in code that few people will see. This is one of the most striking differences between the design of our industrial society and what we now see in a digital and networked age. Just look at the cultural bias being encoded into facial recognition software and think about how little we know about the way in which the Facebook algorithms shape our public sphere.

If we want that rich diversity of place then we need to look more deeply at the code which creates it.

We need to hurry. Technology is moving much much faster than the process of decision making, accountability and democratic debate. We can’t slow down the tech so we have to speed up the decision making not just by ceding power to the developers but instead by creating a more networked democracy in response.

We have yet to resolve the tension between a political cycle that runs in years and service design iterations that can last two weeks. New digital services will not wait to catch the next electoral cycle – they will iterate and evolve and currently the power is in the hands of technologists and designers and however well intentioned we know they do not reflect the diversity of experiences of the people they are designing for.

The answer could be for the design process to evolve and look at how it intersects with the democratic process – providing us with appropriate – and accountable forms of decision making at each stage.

Earlier this year I wrote about rowers, pirates and rockets ships. It was a post about different responses to disruption and its a metaphor I’ve used many times since; rowers are just trying to row their current boat faster, pirates are trying to build the best boat possible and rocket ship builders are bypassing the boat building stage and travelling in a completely different way. I’ve added another group as well – the people who are just trying to mend their leaky boat. People respond to this metaphor because it reflects not only the different approaches but also very much how each of them feel when you are doing them. At its heart its all about how you chose the cross the ocean which separates the then from the now – or in less poetic terms respond to the disruption caused by our shift from a post-industrial society and economy to its emergent networked successor.

How we chose to make this journey matters because the seeds of what we will be are embedded in what we do and we are in the now. How we do something is as important as what we do – this is why culture eats strategy for breakfast.

We can’t let our urgency to redesign services – a desire to create a moonshot vision and go for it – to allow us to do so in a way which designs out the power of people to shape and scrutinise these services. We must design in the democracy so that we can all participate in the future visions for the places we live in.

The world will always be changing – how we work to influence that change matters.

The future of work as a building block of change

The political landscape has still not got its act together – and I am too impatient ...

We (that’s the Public-i ‘we’ not a royal one) have recently put our ePetitions software ...

Just been at the eDem09 conference in Vienna – I will post properly once I ...