In which purpose demolishes culture while culture is distracted eating strategy

I am a bit wary of talking about culture. It’s intangible, elusive and in reality best addressed via behaviours rather than head on. As my team know, I have a huge fear of a conversation about culture or values ending up as a pile of laminated signs that get strewn about the place. It’s an essential lever of change but perhaps best approached through the principle of obliquity because while it is vital to the success of any endeavour the minute you focus on that as the thing you are trying to change you are unlikely to succeed.

I am also wary about culture conversations because people people tend to speak about culture as being A Thing and not an effect which is born out of a myriad of human behaviours and feelings. All of this boiled down to a simple phrase of ‘culture is how we do things round here’.

I think my final niggle about culture is that organisations tend to think of it as being one thing when actually most organisations support a number of sub-cultures which may or may not knit together. These can either be grown in the dark cupboards of hierarchical silos, historical grouping or sometimes from external professional affiliations and identities which compete with internal cultures. From a change point of view this last one can be challenging; who is defining who we do things round here in that instance? This is a particularly sticky question on the context of digital transformation when your digital change makers may feel a stronger affinity to the community they find outside of your organisation to the people they are trying to change within it.

All of that being said I do think that it can be really helpful to examine and map your culture so help you understand what its going on and to help uncover some of the behaviours you may want to effect. This HBR article is a good overview of this but I like this Startegyzer piece as its got a good workshop plan in it which talks about culture as a garden:

I like to call out incentives and processes in the enablers and blockers section as both of these are things that you can make very tangible if you accidentally find yourself ‘doing’ culture change.

We find ourselves talking about culture not because sociologists like me walk amongst us observing it (though we do my friends….we do) but because of the many many articles leaders have read telling them that ‘culture eats strategy for breakfast’* and pointing out that no plan in the world can overcome the desire of your people to do something completely different.

I wrote a while ago about my belief that all change should actually be thought about as system change and this belief brings a challenge to the culture beats strategy trope. While culture may be preeminent as a change mechanism if you have an industrial model of an organisation, in a system or network based view of organisational forms – like the garden metaphor – then there are more powerful forces at play. Because while culture may eat strategy for breakfast it doesn’t and in fact can’t eat purpose. In a more networked organisation culture can be overwhelmed by purpose while the more rationalist concepts of strategy and structure are left behind.

A sense of shared purpose is one of the most powerful motivators for any human endeavour. It’s behind the catalytic effect of a social movement like extinction rebellion as much as it is alive in the most successful corporate or not for profit organisations. It’s the thing that struck me most when I joined CRUK and felt the palpable connection that our people feel to our cause.

It’s precious to us because while most extraordinary people will collaborate for the right reasons. Without a shared sense of purpose our staff – and our supporters – are less and less likely to get out of bed in the morning. And this is the link back to the culture conversation ask even the strongest purpose can’t stand alone – it needs to be reflected through shared values and driven by visible behaviours to be effective. A organisation which is driven by purpose is crippled if it says one thing and does another.

It’s why extinction rebellion is currently so effective – they have a clear goal and theory of change that helps people from different backgrounds collaborate and convene around their purpose.

Aligned culture, values and behaviours will speed us on our way but to properly ignite change in organisations and in systems we need that common purpose. 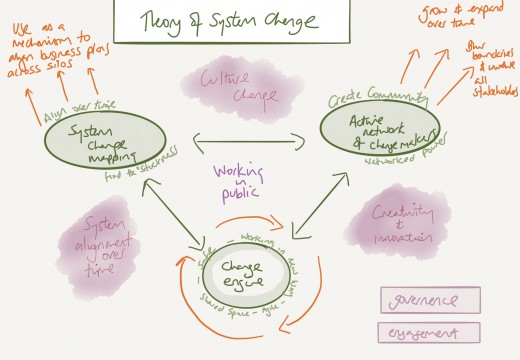 I’ve been a methodology geek for a while and I am now moving on from ...

Social Media is the new black

When it comes to leadership I believe in zero tolerance for digital ignorance.  The more ...

Rowers, pirates and rocket ships: How do you respond to disruption?

We’re all travelling across an uncertain ocean between the industrial and network society – and ...